A Look at the History of Brampton 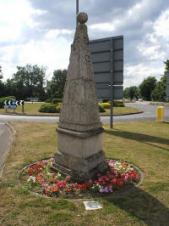 The Obelisk at Brampton

Historically, Brampton was variously known as Brantune (11th century), Brantone or Bramptone (12th–13th centuries), and Brauntone or Brampton (13th century). Scattered human remains dating back 1600–2000 years have been found in one or more gardens of houses near the local primary school. The exact origin of these has yet to be determined.

In the Domesday Book survey of 1086, Brampton was listed as Brantune in the Hundred of Leightonstone in Huntingdonshire. It had two manors, yielding aggregate rents to their lords of the manors in 1066 of £20, which had increased to £21.5 by 1086 Domesday recorded a total of 42 households, which gives a population estimate of 125–200. The area expressed in hides (variously defined as the area a team of eight oxen could plough in a season – 120 acres (49 hectares), thought to support a household – or as the area that could be assessed as £1 for tax purposes. Brampton was put down for 18 ploughlands in 1086., plus 100 acres (40 hectares) of meadows, 194 acres (79 hectares) of woodland, and two water mills. The tax assessment was expressed in geld or danegeld and by 1130 it was being collected annually at rates varying between two and six shillings in the pound. For the Brampton manors the tax liability was 16.3 geld in 1068.

The church and its incumbent priest antedate Domesday. The Church of St Mary Magdalene (earlier St Mary the Virgin) today consists of a chancel with a north vestry, nave, north aisle, south aisle, west tower, and north and south porches. The existence of the church is mentioned in Domesday, but very few features of today's church date from earlier than the 14th century.

Brampton has associations with the diarist Samuel Pepys. Legend has it that his fortune is buried somewhere in the village: during the panic caused by the Dutch raid on the Medway in 1667 he buried his gold in the garden of Brampton House and was never sure how much of it he had succeeded in recovering. Brampton was the home of his uncle, Robert Pepys, elder brother of the diarist's father, whose house still stands. Samuel Pepys is known to have stayed there and at the Black Bull Inn in the village. After Robert's death in 1661, a bitter legal dispute arose over the Brampton inheritance, involving Samuel, his father and several other claimants. It was ultimately settled out of court.

From Wikipedia, the free encyclopedia

RAF Brampton was a non-flying Royal Air Force installation near Huntingdon in Cambridgeshire, England. Formerly the home of RAF Support Command, it also became the home of several elements of Defence Equipment & Support (DE&S), which itself was a result of a merger between the Defence Logistics Organisation (DLO) and the Defence Procurement Agency (DPA), and provided a base for the Defence Security & Assurance Services and Defence Estates.
It was part of the combined station RAF Brampton Wyton Henlow but this was disbanded on 2 April 2012 and the station was renamed Brampton Camp, losing its status as a RAF station and coming under the control of Joint Forces Command and RAF Wyton. The camp was closed at the end of 2013 and all assets were transferred to a new JFIG Pathfinder building at RAF Wyton.[3]

The site was used during the First World War, when Lord Mandeville (who owned the site) agreed to its use to house German prisoners of war. After this, Lord Mandeville let the site for domestic use. During the early years of the Second World War, the site was used to house babies and children evacuated from London. In 1942, the United States Army Air Corps First Bomb Wing Headquarters was established on the site and it was used to billet American airmen.[4] In September 1945, the USAAC moved out to what was RAF Alconbury, to the north of the Brampton site.[5]

The Royal Air Force Technical Training Command billeted staff at RAF Brampton (then known as Brampton Park) whilst the Command HQ was located at Brampton Grange, a large house that dates back to 1773.[6] In 1955, Brampton Park became RAF Brampton and units began to be located there rather than just personnel.[5][7] Units included the Central Reconnaissance Establishment, which was formed at Brampton in January 1957.[8]

In 1953, JARIC (UK) was established[9] and it moved, in 1956, with other elements to the recently formed RAF Brampton.[10] JARIC stayed at Brampton for 57 years with various name changes before departing RAF Brampton for RAF Wyton in 2013.

In 1955, RAF Wyton was granted the Freedom of the Borough of Huntingdon and 40 years later, this privilege was extended to the staff at RAF Brampton.[11]

In June 1977, the Support and Training Commands were unified to form RAF Support Command at Brampton.[12] Support command occupied a large building in the centre of the base that caught fire in October 1985. Staff were moved to empty families' quarters on the base and contingencies were implemented;[13] when Air Marshal Sir John Sutton was appointed Commander in January 1986, he was faced with a burnt out HQ which would eventually cost £10 million to fix.[14] On 1 April 1994, Support Command was combined with Personnel and Logistics staff to form Personnel and Training Command (at RAF Innsworth) and RAF Logistics Command at RAF Brampton.[15]

Originally, RAF Brampton, RAF Wyton and RAF Henlow were separate stations. However, in the mid-1990s, with the closure of RAF Logistics Command then at Brampton, and the cessation of operational flying from Wyton, the two stations amalgamated to become Brampton Wyton. Henlow joined the group in 2001, and brought with it RAF Stanbridge, to produce the largest station in terms of both geography and number of personnel in the RAF. The station stretches from Brampton and Wyton, around 7 miles (11 km) apart, in the north, southwards around 30 miles (48 km) to Henlow, and then westwards some 20 miles (32 km) (towards Leighton Buzzard) to Stanbridge.

However, in 2009, an MoD review decided that Brampton was surplus to requirements[16] because a new intelligence centre (DIFC) would be built at nearby RAF Wyton.[17] The tri-station amalgamation was disbanded on 2 April 2012 and RAF Brampton was renamed Brampton Camp, losing its status as a RAF station and coming under the control of Joint Forces Command and RAF Wyton.[18]

In March 2012, the gate guardian – a McDonnell Douglas F-4 Phantom II aircraft with tail number XT914 – was removed from RAF Brampton and transported to Wattisham airfield in Suffolk.[19] The Phantom had previously flown in two of the squadrons based at what was RAF Wattisham (No. 56 Squadron RAF and No. 74 Squadron RAF) in the 1980s and 90s.[20] It had been a gate guardian at RAF Leeming, North Yorkshire until 1997 when it was moved to Brampton.

The station closed at the end of 2013[21] with large scale demolition of the buildings taking place in 2016 and into 2017. The site is being cleared to make way for housing[22] but some of the buildings and trees on the site are protected. There are plans for between 400 and 500 homes on the site.[23] Military housing was kept on the site for a further three years with a gradual rundown until all staff were transferred to RAF Wyton.[24] The 95 homes left at Brampton were then bought up by a company who rent them out.[25] Controversially, the Brampton Park Little Theatre on the base was approved for demolition in 2014.[26][27] The building had been used as a cinema since the 1950s and had also been available to the general public to provide shows at despite being on a military base. Support to keep the theatre had come from Joanna Lumley and Ian McKellen, but along with other non-listed buildings on the base, it was demolished.[24][28]

Brampton never had an airfield, although Wyton and Henlow used to. RAF Wyton was used by No. 57 Squadron RAF, Cambridge and London University Air Squadrons and 5 AEF flying the Grob Tutor, before they were transferred to RAF Wittering in 2014 apart from No. 57 squadron which was transferred to RAF Cranwell.[29] RAF Henlow is used by 616 Volunteer Gliding Squadron flying the Grob Vigilant and leased out as a general aviation airfield.

The station was for many years home to JARIC – The National Imagery Exploitation Centre, which produced intelligence from all forms of imagery, and trained Service personnel to provide intelligence in support of operations. This was moved to RAF Wyton in September 2013 under the Defence Intelligence Fusion Centre (DIFC).[30]

The audit of accounts for Brampton Parish Council for the year ended 31 March 2022 has been completed and the accounts have been published.

You can find the Announcement and statement "About the Council", under "Key Documents"

Notice is hereby given pursuant to section 87(2) of the Local Government Act 1972 that due to the resignation of Councillor Linda Hicks there is a vacancy on the Brampton Parish Council.

If any member of the Parish would like to be considered for co-option, please contact the Parish Clerk.

You can find the signed document in "About the Council", under "Key Documents"

CCC Declared a Climate and Environment Emergency in May 2019. This declaration set us all on a pathway to securing a sustainable future for our County and its residents. It committed us to developing a Strategy and Action Plan for reducing carbon emissions, improving resilience to climate impacts and encouraging and enhancing the natural environment, and set out our vision for Cambridgeshire.

Since our declaration and first Strategy a lot has changed. We have all faced the challenges of the Covid-19 Pandemic, but also seen our communities galvanise in response and a renewed appreciation for access to green space.

The awareness and understanding of the risks we face from the impacts of climate change has grown. The evidence is clear. It is important that we now transition quickly away from a focus on what the change is, to a focus on the how, and how quickly we make that change happen at the scale needed to avoid catastrophic impacts.

This page will now be the focus for climate actions being taken and to be taken by the Brampton Parish Council.