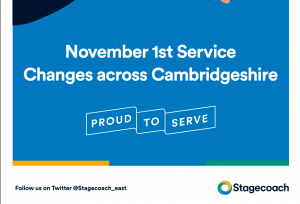 An overview of the revised Busway services: Why have you made these changes?

• Demand has increased following the return of Schools and Colleges

• To introduce more buses to Trumpington Park & Ride (through an extension of Route B) Where do Routes A, B and C operate?

• Route A – St Ives to Trumpington via Cambridge City Centre

• Route C – St Ives to Cambridge City Centre or Cambridge Rail Station, with most journeys extending onto Long Road Sixth Form College on days when the College is open.

Due to the COVID-19 situation

scheduled will not take place.

We are waiting on legislation to

allow these to be conducted virtually,

The vacancy, due to the resignation of Mr Peter Wright, may now be filled by co-option.

Forms for this are available from the Clerk to the Council:

Forms to be returned by Wed 10 September 5pm.