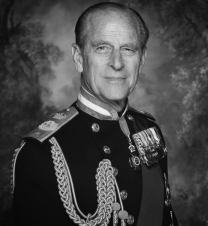 "It is with deep sorrow that Her Majesty The Queen announces the death of her beloved husband, His Royal Highness The Prince Philip, Duke of Edinburgh," the palace said in a statement.

"His Royal Highness passed away peacefully this morning at Windsor Castle. Further announcements will be made in due course. The Royal Family join with people around the world in mourning his loss."

The parish of Brampton therefore wish to express their deepest condolences to Her Majesty the Queen, members of the Royal Family and the extended members of the Royal Household on the death of His Royal Highness Prince Philip the Duke of Edinburgh.
He dedicated his life to serving the nation and Her Majesty The Queen. He has been Patron, President or member of over 750 organisations of which the Duke of Edinburgh Award may be best known by members of our communities; especially our local Air Training Corps Squadron, for which he used to be their Honorary Air Commodore-in-Chief.

The United Kingdom will forever be grateful for all that he has done both at home and abroad.
May he rest in peace.

Due to the COVID-19 situation and until further notice, all council, and associated sub-committee, meetings will now take place virtually via TEAMS conference calling. Access for public involvement can be arranged by the Clerk on application - clerk@bramptonpc.co.uk

Notice is hereby given pursuant to section 87(2) of the Local Government Act 1972 that there are currently two vacancies on the Brampton Parish Council. If, within 14 statutory days after the date of this notice, a request for an election to fill either, or both, of the vacancies is made in writing to the Returning Officer, Huntingdonshire District Council, Pathfinder House, Huntingdon PE29 3TN by ten electors of the Parish an election will be held. If no such notice is given the Parish Council will fill the vacancies by co-option.

If any member of the Parish would like to be considered for co-option please contact the Parish Clerk.

Forms to be returned as soon as possible after completion